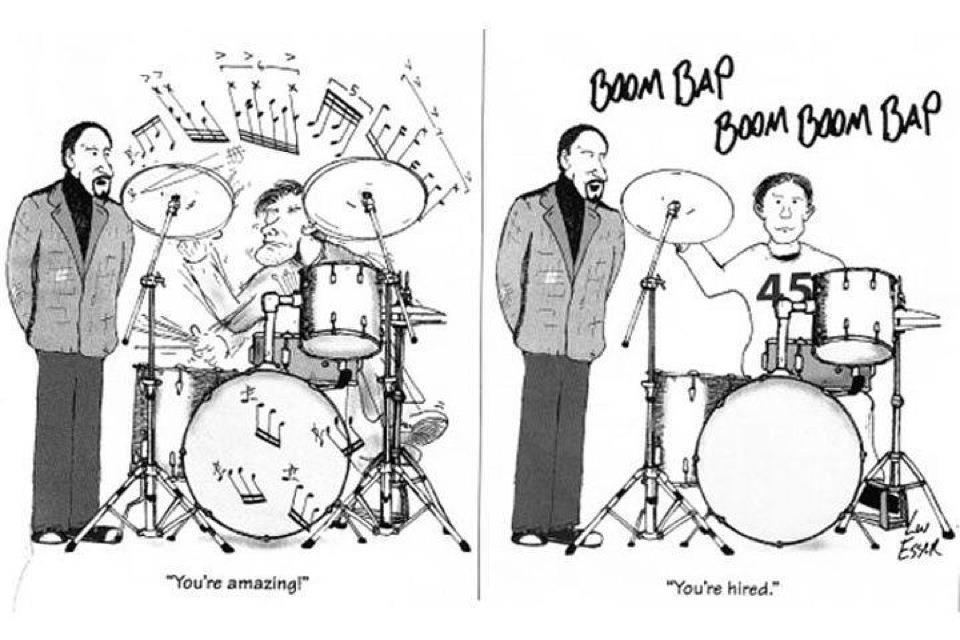 I saw this cartoon on someone’s Facebook page a while back and it really struck a chord with me. It’s just so true!

It really doesn’t matter if you can blaze around the drums playing 32nd notes at 200 bpm. If you can’t play good time with feel than you will never hold down paid work in a band or get rebooked for gigs. I recently spoke to a band who had just sacked their drummer because he was incredibly technically skilled but could not play good time. Good time being the ability to set a groove and stick to it and not move away from that tempo in any significant way. He just didn’t have the patience required to do that. This is what other musicians look for in a drummer because it makes them feel comfortable and grounded, but funnily enough drummers are mostly attracted to other drummers with amazing chops and look up to them and try an emulate their moves. This is all good but  you also have to have the musical ability to know when to use these lethal weapons,as they really can be lethal to your drumming career! I know the sinking feeling you can have when you play a fancy fill you’ve been working on for weeks in an inappropriate place,maybe in the middle of the guitarists solo and the stinging looks that are received. “WHY did you do THAT?” I won’t be doing that again, was my first thought.

That’s not to say there aren’t moments when the drummer can break out and really show off some skills but it has to serve and add to the music and not just satisfy the ego.

I spend a fair amount of my free practise time working on techniques that I’ll probably never get to play in any musical situation but it’s not a waste of time. I believe the more technical mastery you achieve the more that frees the musical side of your brain to really focus on making music and not just playing it. This means you can fully immerse yourself in the music and the playing will take care of itself. This will make you into a much more musical drummer and a much more employable one.

Now where’s that extreme independance worksheet gone, the one where you need 6 limbs and 2 brains?

Drum Lessons For Adults And Seniors